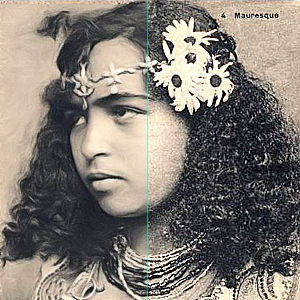 -smooth is a general purpose blurring engine which can dynamically adjust the eccentricity and orientation of a conical diffusion kernel under the control of a tensor field.

In its first form, smooth generates its own tensor field, one geared to reducing noise in the selected images by way of an anisotropic smoothing scheme.

In its second form, invoked when given an explicit tensor field, -smooth implements a variable blurring tool under the control of the tensor field. See "Do Your Own Diffusion Tensor Field" for particular techniques employing this second form.

Even when harnessed in its first form, -smooth does not directly implement  anisotropic smoothing. Instead, the command internally invokes -structuretensors and -diffusiontensors, the G'MIC commands for oriented edge detection and the development of a corresponding smoothing geometry, manifested through a diffusion tensor field. This field then directs -smooth in its subsequent operation. Thus -smooth is first and formost a smoothing engine which defaults to an anisotropic smoothing tool when not asked to do otherwise.

The tensor field produced by -diffusiontensors has the same dimensions as the operand image, and for each pixel in the operand, the field furnishes a corresponding tensor, an object that prescribes a blurring kernel, elliptical in character, tailored specifically for the operand pixel's locale (see -convolve) and constructed to preserve local features while minimizing local aberrations from those features. The non-uniform character of this blurring kernel, adapted to preserving local features, gives rise to the term anisotropic smoothing. The tensor establishes the size, eccentricity and orientation of this blurring kernel. See -structuretensors and -diffusiontensors for further details.

Both forms employ one of two regularization schemes. Choosing a positive angular discretization increment induces the Linear Integral Curves (LIC) method, the default. Setting this parameter to zero induces the Iterated Laplacian Method, which change the interpretation of some parameters. Details follow: 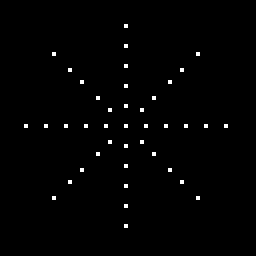 makes a picture of the inner workings of the -smooth command; in particular, it illustrates how spatial and angular discretization diffuse an impulse over an image. To be sure, we essentially grabbed a pitchfork and forced -smooth against the wall, subjecting it to a number of severe boundary conditions. It's not pretty, some of the things we have to do in the G'MIC documentation project. I'm sure it will catch up with us. When the time comes, we'll plead that it was all in the interest of Science.

Here's the littany of nasties. We made a one pixel impulse image, a standard stress test of any signal processing system - that's the bit above about setting one pixel at unit one in a field of zero-valued pixels. Next we made a quick-and-dirty tensor field filled entirely with identity matrices - that's the bit above about resizing the one pixel image '(1^0^1)' to the size of the impulse image. We then passed the tensor field of identity tensors off to -smooth and told it to deal with the impulse. If some of this G'MICry seems odd to you, spend some time with gmic_stdlibs.gmic. We learned all our tricks there. Well, most of them.

Here's the deal. The eigenvalues of the identity matrix are 1, one eigenvector runs at 0°, the other at 90° and this tensor gets associated with every pixel in the operand image. All are zero-valued, save one, the one we explicitly set to one at pixel coordinates (127,127). The identity tensor associated with this pixel, with equal, unit-size eigenvectors, induce smooth to diffuse the pixel omnidirectionally out to neighboring pixels.

Ideally, diffusion is a continuous process, but pixels live in the discrete world, as does the machinery of -smooth. The discrete approximation of the diffusion outward involves both spatial and angular steps. We set these steps as parameters to -smooth. In this particular case, the spatial step size is five pixels and the angular step size is 45°.

Consider the central 64 x 64 pixel portion of the image produced by the gmic pipeline, given above, scaled 4 times. The most striking aspect of the image is the radial pattern, arms at 45° degree increments. Less obvious are the distances separating the pixels arrayed along the arms. Center to center distances, along the vertical and horizontal arms are exactly five pixels. This is less true along the diagonals because where pixels should go do not align exactly with the unit pixel grid, so, understandably there are errors along the diagonal marks as these pixels shift into pigeonholes where they do not quite belong.

Some of you may be thinking: "Holy cow! this isn't anything close to an approximatioin of diffusion!" Some of you may be thinking of setting the angular step to fractions of a degree and the spatial step to tenths of a pixel. That's a good way to get -smooth to run all night. Recall, now that we deliberately, with malice and forethought, backed -smooth against the wall with a pitchfork of extreme boundary conditions. Most images do not consist of isolated bright pixels in vast fields of black; images generally consist of many non-zero pixels, so the rosette pattern multiplexes throughout typical images. The tensor field of identity matrices is also very untypical; generally, diffusion tensor fields engender rosettes of varying size, eccentricity and orientation, fragmenting the regularity of the pattern surrounding the isolated impulse.

In addition, it is not uncommon to run -smooth in a -repeat … -done loop, generally to beneficial effect. In cases where -smooth generates its own diffusion tensor field, the loop induces the command to recalculate its diffusiontensor field on each pass, and the consequences of the previous run are reinforced in the next. To illustrate, modify the pipeline with this new line, -repeat 3 smooth[-2] [-1],100,5.0,45.0 -done. and extract the same central 64 × 64 region for purposes of comparison: 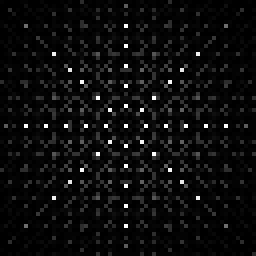 Generally, pixels set to a non-zero value in one pass sprout rosettes in the next pass, the aggregate converging to the ideal diffusion pattern.