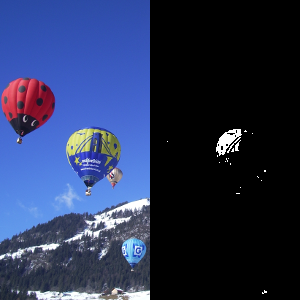 This command finds pixels which more-or-less match a reference color, according to a given tolerance, returning a single channel, bi-value image (1, 0 or 'True', 'False') where unitary pixels ('True') indicate that the corresponding pixel in the original image is within the given the tolerance.

The graphic on the far left depicts balloons over Château-d’Œx in the canton of Vaud, Switzerland, and is an eight bit, unsigned integer RGB image. The command -select_color[-1] 20%,230,233,147 identifies a pale yellow reference color similar to the top half of the middle balloon. The near-left image shows the output of the command; White identifies pixels with colors within a twenty percent range of the specified color, the given tolerance. Black identifies pixels outside this range, with colors too unlike the pale yellow to merit consideration.

The -distance command gives an example of using -select_color. See "Application: Modifying a Warning Image" in that article. Also, see the Theory section below.

The image produced by -select_color is bi-valued, its pixels either zero or one and would not work well in paint programs. Use -normalize 0,255, or similar, if the output is intended for use as a mask in a paint program. See "Images as Datasets".

The command builds a difference image by subtracting the reference color, composed as a constant color image, from the original image, then applies -norm to the difference image, generating a single channel gray scale image of vector lengths, a vector field. the command interprets the tolerance parameter as a maximum admissable length of vectors, representing colors more or less like the reference color. Here is a detailed walkthrough of -select_color's internal pipeline: