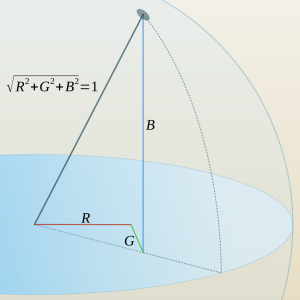 Orientation scales the color components of each pixel in an image so that the length of the color vector is one (see diagram):

In the resulting image, pixel RGB components plot points on a unit sphere centered on the origin of the RGB color space. A line passing through the origin and the corresponding plot consists of points with the same hue, differing only in luminosity. Informally, the plot itself represents the 'pure' hue, with colors tending toward the origin being shades of, and those tending away from the origin tints of the pure hue.

An image transformed by -orientation is an apt dataset for a number of color selection and identification algorithms. How dark or light a pixel may be has been put to one side and only chromatic data remains.

which takes no parameters.

We can regard a color's red, green and blue components as comprising a position vector in a three dimensional RGB color space (see -mix_rgb), with the 'tail' rooted at the origin and the 'head' plotting the color itself. 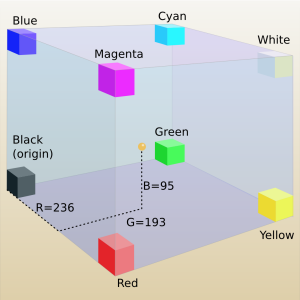 Vectors express both direction and length. The RGB color space which color vectors comprise has a Euclidean metric. We find the length of color vectors by taking the square root of the sum of squared color components: see Pythagorean formula.

There are circumstances when we'd like to consider the length, or magnitude, of a color vector quite apart from the direction in which it points. In G'MIC, -norm extracts that information, producing a grayscale counterpart of a color image where the intensity of pixels reflect the RGB color space length of their counterparts.

In contrast, -orientation extracts the RGB space orientation of a color vector quite apart from its length. This entails scaling each color component of a pixel by the length of the vector which those components define, producing a triplet of unitless numbers, also composing a vector, but one of unit length. These triplets describe the orientation of colors in RGB space. One can imagine an open-ended line starting at the the origin and passing through the plot on the unit sphere. The direction in which this line points is a shared characteristic of all the colors on that line. They share a common orientation – a common hue – but differ in their luminance.

Unsurprisingly, -orientation produces a flat version of its original, generally unappealing, with the shadows and highlights of the original no longer present; both transit to a midlevel gray.  The more saturated colors of the original generally become the prominent features of the processed image, which may or may not be appealing. Since the pixels in the resulting image are either zero or one, they are not directly suitable in paint programs and need to be normalized before use with such tools. See Images as Datasets.

-orientation almost always is a means to an end and rarely an end in itself. While it might not make pretty pictures, the catalog of unit vectors it creates underlies color search and manipulation schemes. In the following example, -orientation produces a chromatic dataset which helps us locate pixels matching a particular 'key color.' We use that in a way to focus peoples' attention upon interesting photographic things. Details follow. 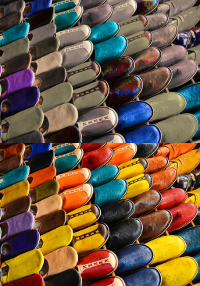 Images can be too colorful, the natural center of interest lost in a sea of saturation, such as in the bottom image of the shoe rack. All the shoes have brilliant, saturated color.

In these circumstances we might look for ways to selectively desaturate less interesting parts of an image to focus attention on the more interesting parts. We might be lucky enough to find that the more interesting parts of the image share a common or a dominant set of related hues. In such circumstances, -orientation would plot these hues very close together on the unit sphere. We could set up a rule that colors very close to the center of the cluster retain their saturation – we may even increase their saturation. On the other hand, we'd like to de-emphasize colors further from the center of the cluster.

The color at the center of this cluster is a key color; our aim is to saturate all other colors on the basis of how well, in RGB space, those colors align with the key color. Colors at or near to right angles with the key color would be very nearly desaturated; closely aligned colors would not. The shoe rack at the top is the same as that at the bottom; we simply picked a blue-green to emphasize, rendering red, orange and yellow shoes in shades of gray.

Recall that the dot product of two unit vectors return the cosine of the angle of separation. Hues differing only in luminosity with the key color are parallel to one another in RGB space and have an angle of separation of zero degrees, a cosine of one. These render as white. Hues transverse to the key color are separated by ninety degrees, a cosine of zero and are rendered black. All other hues render in shades of gray reflecting their alignment with the key color. We might call this dot product image a 'key color map.'

With this map, our way is very easy. We convert our original subject image into Hue-Saturation-Luminosity space and replace the saturation channel with our key color map. Kick it back into RGB space and we're home in time for coffee.

We might like an additional knob to turn. We'd like to control the rate of desaturation as colors misalign. Perhaps only a little bit of misalignment is sufficient to wholly desaturate a color – tight emphasis. On the other hand, perhaps we're accepting of quite a lot of misalignment because we'd like the effect to be subtle, maybe just a gradual shift in the overall color climate of the image – loose emphasis. We can implement such a tolerance knob by post-processing the grayscale key color map. In the following, we use the exponential function to control how much the saturation of colors drop off as a function of their misalignment with the key color.

You can copy keycolor.gmic into your local command file, or use it as is: