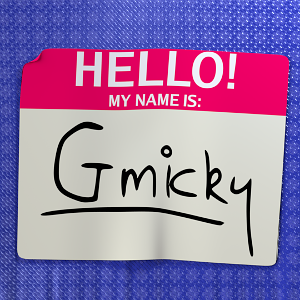 -name labels selections for reference during execution of gmic scripts and for managing layer properties of host applications like Gimp or Krita. Naming conventions differ between these two contexts. See The Host Application Use Case for how -name interacts with host applications which support image layers.

Since this command is frequently used to label selections containing one image, it is easy to misconstrue its purpose to just one of labeling images. As misconstructions go, this is mostly harmless; its malfeasance lies mainly with the mental blocks erected in the minds of gmic script writers who forget the benefits of classifying related images under one meaningful name.

The command associates the collection of images referenced by <selection> with the label <name>. The images become members of a named selection that <name> identifies. Its shortcut is -nm,

Formally, the label <name> may be written with any characters supported by the host computer, but if the intent is to use labels as named selections in command decorators or image parameters, contexts where [ and ] selection operators apply, then gmic further restricts character usage to the class [a-zA-Z0-9_] and such names cannot begin with a numeric.

gmic scripts operating within the context of the host application plug-in may use -name to communicate with the host for setting layer properties, including setting the layer's name in the host application. This host layer name is not the same as the label that -name sets; In fact, the gmic script writer uses -name to label the image with a string composed according to a simple syntax that resembles calling functions. The host application retrieves this gmic-produced label and executes internal functions to set position, layer modes, opacity and the host application layer name, which can be, and usually are, quite different than the gmic label. See The Host Application Use Case for details.

Usage of -name with selection operators [ and ]

In gmic scripts operating within a host plug-in or in a command shell, -name associates a collection of images selected by the command's right hand decorator with a named selection, identified by the string argument given to name.

Once an image is a member of a named selection it retains its association even though it changes its position on the image list.

With the insertion of a new item at the beginning of the list, the sole image in the AmpersandMe named selection acquires a new list index of ‘1.’ Reindexing does not remove it from the AmpersandMe named selection, however, even though the former index of ‘0’ initially linked this image in the named selection. Nor does the apparent error of ‘naming selection zero twice’ hold. The ampersand template, loaded from ampersand.cimg, becomes included in the ‘TheAmpStamp’ named selection through an independent naming operation. Selections provide for the inclusion of images in named selections just at the moment of creation. Subsequent re-indexing does not change associations. The image created in the first step of this example continues its association with AmpersandMe even as the composition of the image list changes. In light of this, script writers mostly do not have to worry about where images in named selections are on the list, saving much counting on one's fingers.

One Association at a Time

An image cannot be associated with more than one named selection at a time. If an image is subsequently enrolled in a different named selection, it loses its association with the previous one.

The following example illustrates the inclusion of a multiple number of images within single image selections. Without named selections, this example would have been both harder to code and harder to read. In addition to index bookkeeping, named selections let the gmic script writer signal intent through an apt choice of selection names.

The template, ampersand.cimg, is a single channel binary mask with each pel being set to either 0 (background) or 1(foreground). We multiplex this mask twelve times, leaving thirteen ampersands on the image list, and group these into separate selections using the modulo-n (:n) selection notation. See 1.5 Command Items in the G’MIC Handbook or Command Decorations at this site. The initial -input command introduces a three channel color map with four swatches, written as an image specification, and organized for use with -map.

The Host Application Use Case

When running in the hosted gmic plugin in such applications as Gimp, Krita and similar layer-based graphics applications, filter authors can set the name, opacity, compositing mode and position of newly exported layers. -name is able to convey a small script to the host application that, when executed, sets pertinent layer attributes. The filter author may also query the host application for current values of a layer's name, opacity, composition mode and position. These are available through a set of gmic commands that are only defined when a gmic script runs in the gmic plugin, and not in other environments.

The filter harnesses -name to incorporate both the RGB components of the central color of interest and the selectivity setting in the mask's host application layer name. With this, the filter user can later reference the properties of the mask, and perhaps, later on, produce another mask with similar settings.

Copy and paste this code in your local .gmic file. Users of legacy pre-2.0 gmic plug-ins need to change comment tag #@gui to #@gimp and #@cli to #@gmic (See the 2.0.0 G'MIC release notes). The directions for using the filter are embedded in it's header.

The mask generator itself, -sofsel, has been implemented for the command line environment and most of its workings are described in -select_color theory. -softsel differs from -select_color in the final stage. instead of harnessing a binary function to set pixels as in-or-out of tolerance boolean flags, -softsel uses a Gaussian distribution function to set a varying degree of selection. Largely deselected pixels are not luminant, mostly selected ones are, and they vary in accordance to a Gaussian distribution.

The coding germane to this article is in the plug-in wrapper and the pertinent lines are highlighted with color. In the green line, the script author asks for the host application layer name corresponding to the current image. -gui_layer_name returns this name as a part of its status, which sets the command level variable$nm. Currently, there are four such host access commands: