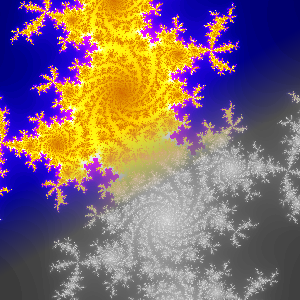 Figure 1: A mapping from gray to color

In a restricted sense, -map is the inverse operator of -index. When one sets that command's map_palette parameter False, -index produces a single channel gray scale image, the index map. its pixels contain indices that assign reference colors from the palette to the pixels. The -map command produces a new image by following all of the assignments indicated in the index map.

In a less restricted sense, one may regard any gray scale image as an index map; such need not be produced by -index. Taking this liberty, then -map becomes a tool to convert gray scales into "false color" images.

One practical aim of this idea is to make lucid features that are not particularly clear in some gray scale representation of a phenomenon. One makes a correspondence between gray levels and color (i. e., constructs a palette of reference colors) and then makes astute color assignments for those very nearly identical grays that are difficult to distinguish.

The command has the form:

Root polishing by Newton's method entails using a succession of trial values starting from initial guesses. These trial guesses take the form of complex numbers, x + iy. Some guesses converge very rapidly toward the roots of a given polynomial; others do not converge until thousands of iterations have taken place and some guesses never converge.

The picture below stems from a dense, rectangular mesh sampling the complex plane around the origin. Each sample becomes an initial guess for convergence under Newton's method to a designated root of some degree two (or greater) polynomial. If the guess converges to one of the other roots, the pixel corresponding to the sample is set to black. Otherwise, it is set to a gray.

The level of this gray, L, relates to the number of interations, i, through:

for total iterations i, an integer greater than zero. If it should happen that a sample value converges acceptably close to the root in as little as one iteration of Newton's Method, then L ≈ 255.0 and the pixel corresponding to the sample is set to white. As the number of iterations increase, the gray level, L, converges to zero, but never reaches it. If, after 10,000 iterations, the guess is still has not converged, we abandon all hope for that particular sample and set the corresponding pixel to L ≈ 19, the darkest gray in the image that is still not black. Samples that converge to a particular root compose its basin of attraction. The picture below depicts a portion of the basin of attraction for one root of some polynomial (for present purposes, it does not matter which one).

It turns out that the basin of attraction for a particular root has a really quite fantastic, fractal shape if the degree of the associated polynomial is two or higher. But there is a problem with the way we are imaging this basin of attraction. A sample that takes more than 10,000 iterations to converge upon the designated root is a very dark gray. A sample that converges to some other root is black. These two very distinct cases, that have very different meanings, have almost the same shade of gray!

This is the kind of conundrum that -map can fix.