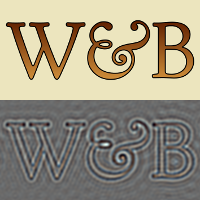 This command isolates a band of frequencies in an image's spectral representation and then re-renders it spatially.  The details of the new image are just those attuned with frequencies included in the chosen band. These images typically have negative minimum values and average values very near zero, so often need to be adjusted for display.

The format of the bandpass command is:

Two parameters, each relative frequencies, set the lower and upper boundaries of the passband, the chosen spectral region. A relative frequency of 1.0 (100%) corresponds to a pixel wavelength equal to the square root of 2.0, approximately 1.4142136. On the low end of the spectrum, the average value of an image, a constant bias level over the entire image, may be thought of as having an infinite wavelength and a relative frequency of zero (0%).

Cutoff wavelengths, λ, measured in pixels, establish the smallest and largest wave lengths in a bandpass-filtered image. These equate to relative frequency, ωr, through:

The "W&B" monograph at the beginning of this article shows the command's effect.

Images have representation in both spatial and spectral domains. The Fourier Transform ('Fourier analysis') translates images from their spatial to spectral representations, the domain where the -bandpass command operates. The -bandpass command performs spectral filtering, preserving certain spectral coefficients and zeroing others out, The inverse Fourier Transform ('Fourier synthesis') returns the spectrally modified image to the spatial domain, where the effects of the spectral filtering are realized.

The spatial representation is closely allied with how we see objects in space. A pixel constitutes a definite space point, offset with respect to an origin by length, height and depth coordinates, and marked with a particular hue. One could regard a large rectangular array of such pixels, in aggregate, 'painting' the image one point at a time.

From such a collection of regularly spaced samples, Fourier analysis finds analogous spectral coefficients. These correspond to spatial domain sine curve wave forms of various frequencies, scalings, orientations, and phases that, in aggregate, also 'paints' the image, though not by one point at a time, but through constructive reinforcement and destructive interference of aptly chosen waveforms. The inverse transform, Fourier synthesis, finds such an apt set of waveforms in the spatial domain when given a set of coefficients in the spectral domain.

A large class of filtering schemes may be effected by manipulating spectral coefficients. -bandpass is one such, serving as a front-end to -fft and -ifft, respectively G'MIC's Fourier analysis and synthesis commands. In operation, the -bandpass command composes a boolean mask; those coefficients falling into the pass part of the mask are preserved, and are set to zero otherwise. These masks appear as rings around the spectral origin, the lower and upper boundary frequencies of the passband command corresponding to the inner and outer radii of the rings. Spectral coefficients falling within such rings are preserved, those falling outside are set to zero. Since these radii are measured off from the origin of the spectral domain, their lengths correspond to lower and upper cutoff frequencies.

The spatial waveforms arising out of such elided sets of coefficients only partially paint the image, the collection of wave forms corresponding to those spectral coefficients preserved by the mask. The effects of this depend primarily on the chosen lower and upper cutoff frequencies and the magnitude of their differences.

The following gallery shows how a canonical image changes though various -bandpass spectral filters. The red horizontal line marks a particular pixel row. The graphs below depict the row in both the spatial (top) and spectral (bottom) domains.

It was customary in old maps to indicate water by a series of caustic lines radiating out from the shoreline, growing finer and more widely spaced further from the shore. It was labor intensive, but in the absence of color, a necessary sacrifice of time to indicate where the bodies of water were. The practice faded with the arrival of colored inks.

With the bandpass command, such lines arise as a matter of course, and effect that can be seen in many of the examples, above. The following command produced the effect on the right, an excerpt from a much larger image (4096x4096).