Wavelet Analysis and Synthesis in G'MIC 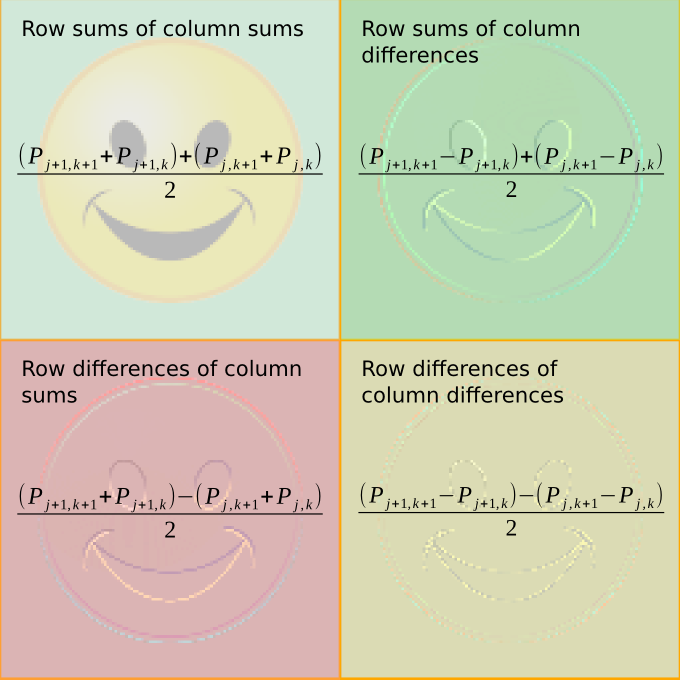 Similar to Fourier analysis and synthesis (-fft, ifft), a wavelet analysis transforms an image into another representation that reflects its frequency, or spectral, content. Unlike Fourier analysis, the wavelet analysis retains spatial relationships. One may view a DWT analysis and recognize scaled versions of the original image, locate versions at a particular scale, and alter them, When reconstituted by the synthesizer, -ihaar, these will reflect the changes applied only to the selected levels of detail. Thus, as in Fourier analysis, one can undertake frequency-based editing, but – unlike the Fourier transform – may readily locate particular places in the image to work an effect.

Unlike Fourier synthesis, there are myriad basis functions which can perform wavelet analysis and synthesis, these tailored to meet particular requirements. G'MIC uses Haar wavelets, the most compact and simplest to implement, and the oldest, first described by Alfréd Haar in 1909.

The -haar command progressively reduces an original image into sets of three axially oriented differences and one base image at each scale, in aggregate forming an image pyramid. At each cycle, or scaling, the command operates on an intermediary from the previous cycle, or, when at the start, the original. Each cycle produces an analysis pertinent to image detail at that scale. The image pyramid contains all possible analyses stacked one on top of the other.

For clarity, the following narrative describes the Discrete Wavelet Transform in two dimensions, though the extension to the third is straightforward. One reads “octant” for “quadrant” which has one base cube and seven difference regions, instead of three for the two dimensional quadrant. G'MIC's implementation will analyze along width, height and depth dimensions when presented with a multi-slice original.

During one cycle, or scaling of the Discrete Wavelet Transform, the analysis for that scale takes the form of four reduced and modified versions of the input image. Scaled at 50% of the input by length, these modified versions occupy the same buffer as the original, with each situated in one of four quadrants, and, following a scaling, each conveying information about average intensities (the base image) or axially oriented gradients (the three difference images) that might be present at the particular scale.

Formally, one cannot further scale an image if, at some intermediary scaling, one or two dimensions becomes indivisible by two, but in practice, one may pad the width and height of originals with zero-valued pixels as necessary to obtain images with power of two dimensions. See -resize_pow2.

Walking Through The G'MIC Implementation

The accompanying G'MIC code has been adapted from the implementation of the -haar command:

The left half of the image (sum_col) consists of pairwise column sums, the right half (diff_col) pairwise differences, the whole scaled by the square root of two.

Though not obvious in the math or script, this stage reflects a decimation and two convolutions of the initial data set. In effect, the left hand side of the image evolves from a two pixel wide box filter – the Haar scaling function – convolving a decimated version of the input data. Correspondingly, the right hand side of the image evolves from the Haar wavelet convolving over the same data set. The Haar wavelet is zero everywhere except for a one unit positive impulse followed by a one unit negative impulse – a "square wave".

A pixel, Pj,k in row j and column k, and its immediate neighbors, Pj,k+1 ,Pj+1,k, and Pj+1,k+1 “merge together” in four different ways after one DWT scaling, producing four new pixels. These “migrate” to each of the quadrants of the analysis.

Each arise from a particular combination of pairwise sums and differences that characterize the quadrant. These combinations are: