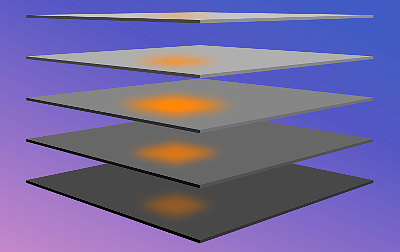 The G'MIC image has three spatial dimensions; it is mostly out of habit and custom that many people (this writer included) generally fuhgeddaboudit and only use single-slice, two dimensional images. That is a shame, as many G'MIC commands do their bidding in three dimensions as well as two. They are untapped sources of cheap (in terms of rendering time) animation.

The diagram on the left illustrates how the -blur command behaves when an image has more than one slice. An orange pixel affects neighbors along the z axis (depth) as well as along the x and y axes. Play these slices as an animation and the blurred pixel becomes a kind of a pop! explosion.

The -bandpass command also operates in three dimensions. In other places, we've harnessed this command for spectral filtering, eliding all but a subset of frequencies in the original image. Taking an image with such truncated spectral content back into spatial domain gives rise to a set of sine waves that do not quite reconstitute the original; we see patterns of constructive reinforcement and destructive interference that would not have been especially noticable had we not erased those parts of the spectrum needed to reconstitute the original.

The key idea in this Cookbook piece is this: -bandpass, like many G'MIC commands work in three dimensions. And when we think Animation, that extra dimension can be time. The following example happens to use the -bandpass command, but the techniques presented here aren't married to that command. They can be generalized to any other command which operates 'in the round' over slices as well as the width and height of images.

Here is a pipeline that produces a kind of a cauldron effect. The nice thing about clips produced by this pipeline is that they can be seamlessly looped without a 'pop' crossing from the end to the beginning of the loop. Details follow.

The video clip on the left is a product of the previous G'MIC command pipeline. It reminds us of percolating liquid in a cauldron. Poetic interpretations aside, we are observing the low frequency components of sparsely scattered noise, a three dimensional interference pattern which our "camera" depicts two dimensionally, displaying slices through time. Particular curdling textures depend very much on the choice of the lower and upper relative cutoff frequencies that we gave to the -bandpass command. Larger relative frequencies give rise to finer, higher frequency detail. The blobs are smaller and seem to curdle faster. A larger difference between relative frequencies admits a wider range of blob sizes. The cutoff frequencies can be set too close together. If the difference between the lower and upper relative frequencies becomes too small, the resulting images may be all black.

Because this sequence is a product of Fourier analysis and synthesis, it can be seamlessly tiled in the x, y, and z dimensions. Not only do the top and bottom and left and right edges match, but the end of the animation segues into the beginning, so this material can be used out of the box in an endless loop without having to worry about a 'pop' as the animation loops around. This characteristic stems entirely from the -bandpass command and the underlying Fourier transform commands, -fft and -ifft.

Nearly everything we do with G'MIC is not an end in itself, but furnishes stepping stones to other effects. The cauldron animation can furnish displacement fields to distort other visuals, and the cauldron visual need not even appear itself.

We used cinelerra to composite the title sequence onto the original cauldron clip.