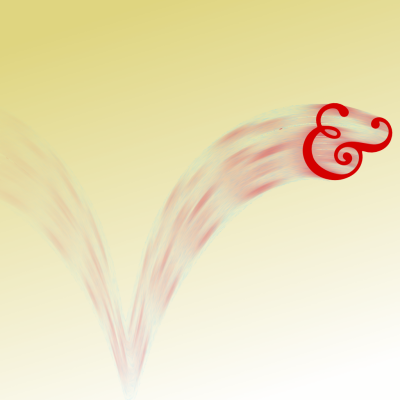 The Blur by Color filter grows out of the "Do Your Own Diffusion Tensor Fields” series and if you're interested in coding G'MIC go read that first. In particular, the walk-throughs on Directional Blurring, and the preceding walk-throughs upon which this filter is based. We won't go into much of the theory here.

We were hesitant about writing this filter. There happens to be a bazillion ways to blur images in Gimp and its various plug-ins, at least seven filters in-Gimp-G'MIC plug-in itself – and who knows how many more may have been written out there in the wild. Why another?

Here's why. It is grounded on a generic, diffusion-based blurring engine – the G'MIC -smooth command – with a variable kernel that can be steered pixel-by-pixel with a tensor field. You don't need to worry about tensor fields: the takeaway is that you have very precise, pixel-by-pixel control over how your blur goes, and you will have a high quality blur.

The other blurring tools are fast. They're optimized for particular effects and if their aims fit your project run with them. However, if you want to craft how blurring takes place in a manner that no standard approach anticipates, then this blurring tool is the way to go. Essentially, you draw, or make some other image, into a blurring map. Drawing this map amounts to designing your own filter and you can specify blurring amounts and directions right down to the pixel level, should you so desire. Blur by color will never be fast. But it will be precise. And good.

How you make that map is up to you. There are two and a half approaches, painting the blurring map by hand, transforming a copy of the image in some way so that some aspect of the image itself controls the blurring process, or a specialized variation of making a map by hand, the contour method, where you just paint a few lines so that the blur follows the line contour. We did the bounce path of the Goudy Ampersand using this method.

Installing this filter is semi-automatic. It is distributed from the gmic.eu and all filters from that source can be downloaded and installed by using the refresh button (circular arrow) at the bottom of the Gimp-G'MIC plugin main dialog box. As of this writing, September 2014, the Blur By Color filter lives in the “Testing → Gmic Tutorials” branch, but may wander off into the main filter tree if it behaves itself and acquires friends. If refresh doesn't seem to be working for you, try checking with the usual gang of suspects.

Nearly everything about custom-blurring an image is encoded in the blurring map. The filter itself has just two controls:

Blur By Color needs to be able to find its blurring map, so in Gimp-G'MIC dialog box, under “Input/Output” (lower left, under the Preview pane) set the “Input Layers” to “Active Above” or “Active Below” – we like this latter setting because we tend to put control layers like the blurring map under the production layers. We also suggest setting “Output mode:” to “New Layer(s)” to preserve your blurring map. A lot of technique involves iterating over a “modifying the map, making a blur” loop as you increment your way over the finish line. And for people studying up on G'MIC code, we always suggest a “Very Verbose” message output, either to log or console.

If you get a preview error message with the cryptic phrase “Command 'local:' Invalid selection [-2,-1]…” followed by more cryptic stuff, then the filter cannot find its blurring map. You need to set Input Layers, or select the right layer – or perhaps actually create a blurring map.

So, how do you create a blurring map? It's just an image. It may be drawn from whole cloth, derived from your production, or a mix of the two.

There are three rules, one for each Hue Saturation Lightness channel, which govern how blurring goes.

That's all you need to know. Go out and have fun.

Perhaps the implications of these rules have yet to sink in. Like the handedness of the color wheel when you're trying to make a radial blur (it needs to be clockwise, red on top, blends through yellow to green on the right). How about blurring around a center, transverse to the radius?

Read on if you don't have the answer to that on the tip of your tongue. Or even if you do. 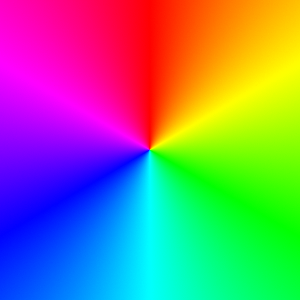 Figure 2: A clockwise color wheel with 0/360 degrees on top

Color wheels were an unexpected boon to the writer, tipping him over the edge to write Yet Another Blurring Filter. Had he done the math he would have seen it coming, but he didn't and got surprised instead. Copy and paste color wheels into your blurring map where ever you want a radial/spiral/angular blur effect.

At two extremes color wheels will alternately generate radial blurs or angular blurs. These are, respectively the 0° and 90° orientation of the clockwise color wheel. Rotate the wheel counterclockwise at some other angle and get a counterclockwise spiral. Rotate the wheel clockwise for a clockwise spiral. Because you're composing a blurring map, you have a work flow advantage over using the dedicated radial and angular blurring filters. You can precisely position and orient as many color wheels as you want in strategic positions. You rotate color wheels not by the obvious choice, the Rotation tool, but by the Colors → Hue-Saturation tool, which doesn't actually move bits around. You isolate the color map to its own layer, the typical default case when you first load a color wheel from disk using Gimp's “File → Load as Layers” option.

You only need to make one. From then on, you will open it as a layer, resize it, flip it horizontally or vertically, desaturated the center or edges or points in between, twirl the colors around the wheel using Gimp's Colors → Hue-Saturation tool, select subset ranges with “Colors → Map →Rotate Colors...” dialog box, probably warping it as well. Stupid Cliché Time: “You are only limited by your imagination.” (Duh!)

Here we give two color wheel recipes, one based on the Gimp GUI and the other based on the G'MIC command line tool. Guess which one we prefer.

For all that, you should have a clockwise color wheel. If it looks like the one starting this section, red on top, cyan on bottom, colors running clockwise from red to orange to yellow to green, you're in.

Since, after all, this is a web document about the G'MIC command language, we have to tell you how to do it in G'MIC. You get professional results without needing much hand dexterity.

If it is a decent amount of time after September 01, 2014, 5 PM UTC, (a day is more than enough) and you have an Internet connection, then typing:

in a shell or some such will put 'myclockwisecolorwheel.png' in your local directory, a file containing a 1024 × 1024 pixel colorwheel.

That's it. You only have to use the -update command now and then, by the way. It goes out and fetches the latest G'MIC command definitions straight from the server at gmic.eu. You get the exact same results by pressing the Refresh button on the Gimp-G'MIC plugin top level dialog box; plugin or command line updates both.

If you only have partial connectivity or, for some reason your operating system doesn't have either one or another helper programs called 'curl' or 'wget' then copy and paste the sidebar contents into your ~/.gmic file (UNIX-like O/S) or /%APPDATA%/gmic (Windows).

Henceforth, then, just type '-colorwheel' and up to three arguments.

We go into why these last two parameters might matter in the next section, a tutorial dedicated wholly to the color wheel.

So you have a color wheel. Now what?

To get you started, the following constitutes a very basic variation on a theme. We start off with a blob of white salt-and-pepper noise on a black background. In most cases, we renormalized the result to the range of 0,255. The amplitude setting on the filter was, in all cases, maxed out at 1.00. The range was "N" (Normal) throughout. 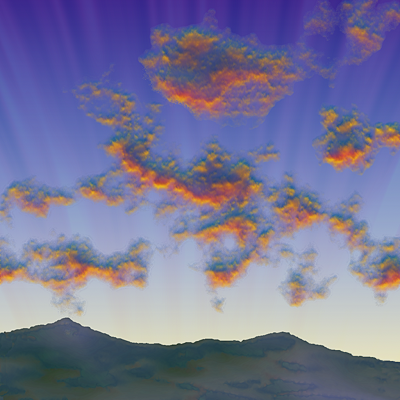 This walk through stems from 4. Following Contours a topic among the basic examples. That example is a particular case of harnessing the G'MIC filter Contours → Gradient RGB to translate geometry into blurring maps.

Gradient RGB's remit is to find edges (i.e. really, really steep gradients), and report their magnitude and orientation. For the latter, it uses a color coding scheme grounded on the HSL/HSV color wheel. That is, Gradient RGB uses red and cyan for vertically oriented edges, Lime Green and violet for horizontal edges and so forth. This is also how Blur by Color maps direction to color, so the marking done by Gradient RGB may, in principle, be harnessed by Blur by Color to produce a blurring map. The map mimics the edge orientations initially present in the drawing.

The plan, then, is to use some high contrast lines oriented in directions along which we'd like to blur, then run Gradient RGB to get a colorful blurring map that encodes these orientations. This becomes food for Blur by Color which will smear Diamond Cross clouds into crepuscular rays.

Before and after an insertion of crepuscular rays.

A casual study of the Gimp-G'MIC Contour→GradientRGB reminds us that the manufacture of blurring maps for the Blur by Color filter has a close relationship to orientation and directional fields. Indeed, GradientRGB makes a rather routine Tinker to Evers to Chance play where -gradient characterizes intensity changes along an image's width and height, contained in two scalar fields (gray scale images). -append folds these into a 2D direction field, and -direction2rgb produces a color RGB representation of the same. This last element furnishes a blurring map based on the gradients found in the original image.

Of note is the intermediary product, the 2D direction field. Quite apart from being an intermediary in the production of a blurring map, it may  be harnessed by -warp to shift the geometry of an image. With the 2D direction field and the blurring map developed from it, one may then blur and warp an image in a coordinated way. Perhaps a stiff breeze can motion-blur a tree and bend it at the same time. Particulars follow; where we dissect the stiff breeze we used in our capacity as demonic tutorial editors.

We could go on and on, there is no end in sight, but we have to call it a day somewhere. We'll close shop with a gallery of odds and ends, tips and techniques, more or less centered on Blur by color, as they strike our fancy. Go out and play now, but stop by from time to time to see what might be added.