sigma1: The radius of the standard deviation ellipse along the distribution's local x axis

sigma2: The radius of the standard deviation ellipse along the distribution's local y axis

angle: The rotation, in degrees, of the local axis with respect to the image axis

Sigma1 and sigma2 may be expressed as absolute distances in pixels or as relative percentages with respect to the image dimensions. Defaults are: 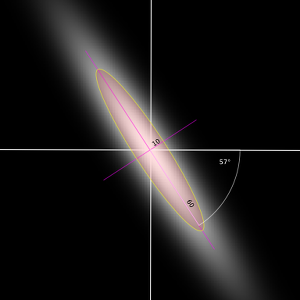 In the illustration on the left, the standard deviation ellipse is in pink.

We often use images produced by this command as spectral filters, that is, multiply Gaussian distributions against the real and imaginary components of the spectral representation of an image produced by -fft. This operation is closely related to -bandpass, in that we are supressing all but a portion of the spectral coefficients, making various kinds of passbands.

Though with this command, spectral filtering is more involved than with -bandpass, a good deal more control may be had over the spectral filter. Eccentric elipses, such as the one depicted here, give rise to images with strong directional character when the -ifft command takes filtered spectral components back into the spatial domain. This approach furnishes an especially rich source of textures when the initial image stems from -noise or -plasma.