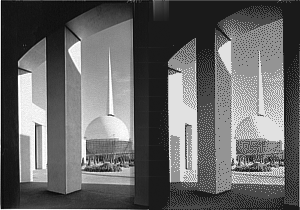 Given one or more selected images and a count, -autoindex produces new versions of the images composed of just the number of colors given by the count argument, these chosen so that the reduced-color image resembles its original to a fair degree. The reduced-color image may be dithered to further minimize differences between reduced-color and original versions. Use the command if some technical reason constrains the number of colors that can be used in an image or for the artistic effect of a somewhat posterized result.

-autoindex combines -colormap and -index into one step; the convenience of consolidation sacrifices access to the palette created by -colormap. If one discovers after the fact that the palette is needed, run -colormap[…] 0,0 with the image filtered by -autoindex in the selection […] to recover the palette.

The command has the form :